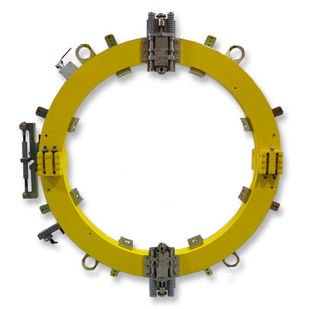 The Wachs HDSF range are a heavy duty split frame machine tool to cut, bevel and counterbore. The unique design allows them to mount over large diameter inline pipe and carry out almost any machining operation.

E.H. Wachs HDSF Heavy Duty Split Frame clamshell style machines are the largest and most rugged in the Wachs split frame family, and are designed to cut, bevel, single point, counterbore and face flanges on large diameter pipes from 12.75 inch – 84 inch O.D. (DN300-2100). Designed for parting and beveling of larger diameter pipelines in the field, and named for its ability to be split in half or scissor open for mounting to the O.D. of inline pipe, the HDSF series is constructed with a bigger cross section, larger gear sets and massive hardened steel components.

Like all Wachs split frames, the HDSF produces a precision lathe finish using Wachs safe cold cutting process, which unlike torch cutting and grinding minimizes the risk of explosion on gas and petrochemical lines and eliminates a HAZ (Heat Affected Zone). Available in six standard sizes to cover the most common pipeline diameters (with custom sizes available by special order), each HDSF can accommodate a full 12 inch (305mm) range of diameters per machine size. Offered as a complete kit in your choice of hydraulic or pneumatic with tool slides, trip and drive motor all included.